The sorority house party for the girls of 'Mean Girl High' rages in an adjacent apartment unit. This unit in particular houses the only 'male' member of their sorority house whom some refer to as 'Toilet Boy' or 'TP Face' (short for Toilet Paper Face).Located behind a privacy curtain in a darkly lit room is where 'Toilet Boy' lives. The girls are training him for future potty use. In the meantime he's used as toilet paper, or to sit on for breath training in order to become a full fledged toilet seat that can endure having school girls sitting on it for prolonged periods of time. The first girl to use it has it clean her bottom like toilet paper. Then sits on it's face using it as a 'human bidet' to eat her asshole clean under her uniformed skirt. At times she gives it the middle finger, points and mocks it as it smothers beneath her ass. She's a gorgeously cruel blonde who not only looks down on it, but mocks it. Once she's done sitting on it she'll return to the party. As for 'Toilet Boy' the only thing it has to look forward to is the next butt to sit on it's face.'Melissa's Edition' contains an extra camera angle. 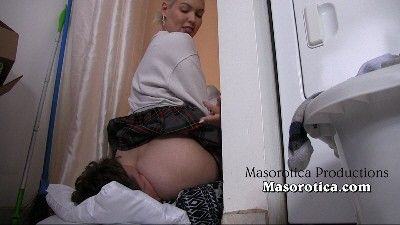